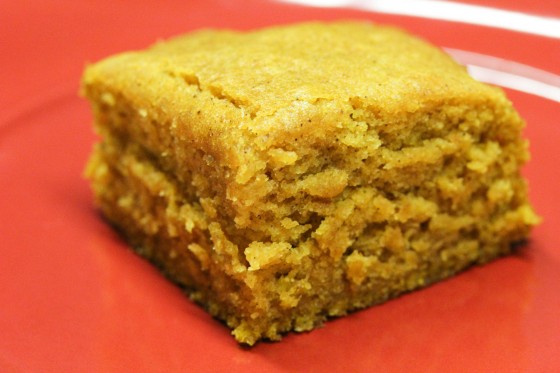 Half way through fall quarter of freshman year, I met a girl named Aurora. One day, Aurora was particularly craving a pumpkin dessert. Specifically, she was dying to have an “out-of-this-world, super-moist, and unbelievably dense” pumpkin bar that her friend once brought for her. Determined to please my new friend, I googled a few recipes and decided to try something out.

Two years later, I’ve added a few adaptations from the original recipe. Some call it a pumpkin pie in bar. Others say its the best pumpkin bread they’ve ever had. Originally, the recipe was intended to be prepared in a jelly roll pan as a pumpkin bar with cream cheese frosting but this version makes it a lot more healthy. I used more spices than the original recipe to increase the familiar thanksgiving flavors. To be honest, cinnamon is the only “crucial” flavor but I like having a variety. If you have a pumpkin spice you’re particularly fond of, feel free to substitute that in!

A trick that I’ve picked up is cooking the pumpkin with the spices slightly. I’ve never tasted the “canned” flavor in my pumpkin, but people claim that it makes the final product taste a lot better. Since then, I’ve used the same method to prepare my pumpkin pie and pretty much anything that uses canned pumpkin. 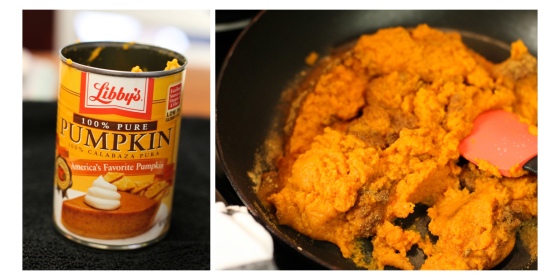 One thing to note is that the batter tends to be lumpy. I recommend to not over mix the batter and leave the lumps – they work themselves out when the batter is baking.

This was the first time that I used Pam baking. Typically a traditionalist, I cover my baking pan with foil, coat lightly with oil and then flour. I was completely blown away by the performance of Pam and I think I’ll be using this a lot more in the future.

Just in case you were wondering… 2 years later, me and Aurora have grown to become great friends. And I owe that, to this “friendly” pumpkin bread.