My favorite part of baking during the winter is having the house warmed up by the oven when you pull out the pipping hot dish. Granted that I doubt my oven is hot enough to heat the house up when I open the door, it doesn’t deminish the joy of the thought itself. I particularly find enjoyment in baking bread and rolls during this time of the year.

During Christmas, there was one special dessert that I worked on to show you all and it is my photo guide for cinnamon rolls! I’ve already posted a recipe for cinnamon rolls, but I wanted to show you all some techniques for kneading dough by hand and just how fun it really can be to just get your hands dirty sometimes. I think this recipe also shows how easy it is to quickly throw a dessert together, even with the supermarket madness going on during the holidays.
Assisting me today was the older sister I’ve always wanted, Shun! Shun is also the owner of the kitchen I borrowed for the French Macaron Photo Guide. Shun, and her husband Peter are both doctors, parents, and my inspiration to becoming a doctor.

more after the break!

I like to start by proofing my yeast in some warm milk and sugar. Because we are proofing in milk, it won’t foam up as much like yeast in water.

Even though the original recipe adds the butter in towards the end of the kneading process, I’ll be melting it today and adding it in like I do with my braided garlic bread.

After working the butter in, I add the eggs in. People who follow my bread making techniques kind of see where I’m going with this: I like to add all of the “drier” liquids in like fats and eggs. Then I add the thinner liquids.

This is pretty much what yeast looks like when you proof it in yeast, not much difference but you still see all of the bubbles.

Then, I work my milk mixture into the dry ingredients. At first, it will seem chunky and unsmooth. This is fine; kneading will fix everything!

You want a thoroughly floured board. Otherwise, you’ll end up with a sticky mass stuck onto your hands and the board.

Kneading bread actually isn’t that hard. I’ll show you how to do it in two ways. For the first method, flour your hands and the dough. Holding the bottom portion with the palm of your left hand, stretch the top part of the dough out with your right hand. Then, fold the stretched dough back down. Turn the dough by 90 degrees and repeat. Simple enough…right?

I find this recipe to make a perfect dough for practicing this traditional kneading method. Usually I like my doughs on the wetter side so it tends to stick to my fingers, making this kneading method useless. When that happens, I use whats called the French knead. This method relies on the tackiness of wet dough and at first it may seem like the dough will never knead properly because it is sticking every where. No worries though, by following this method the dough will almost always knead properly. The only downside to kneading dough using this method is that it does require more energy and I tend to find it a good workout. To knead using the French knead, first flatten your dough out. Pick it up on the top using your hands and slam what used to be the bottom of the top side down onto your surface. Then, fold the dough back onto itself. Rotate the dough by 90 degrees and repeat without flattening it. At first the dough will stick to the surface and your fingers but after repeating this for a few minutes you will find your dough kneaded perfectly! 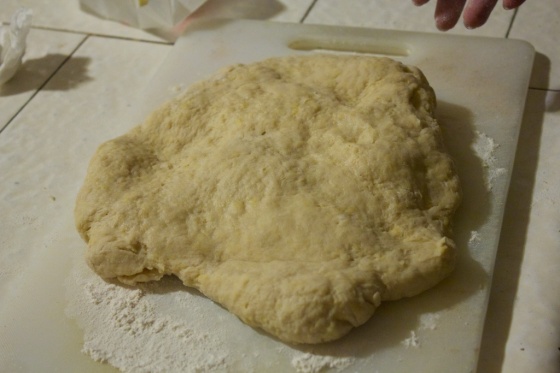 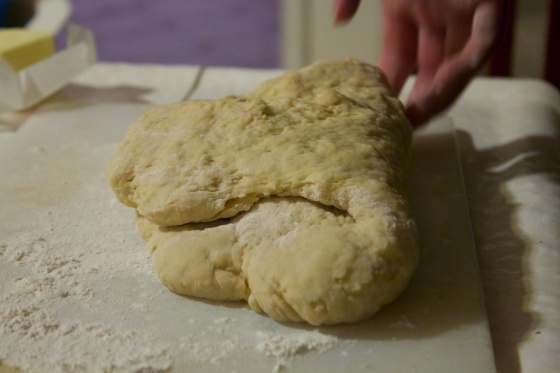 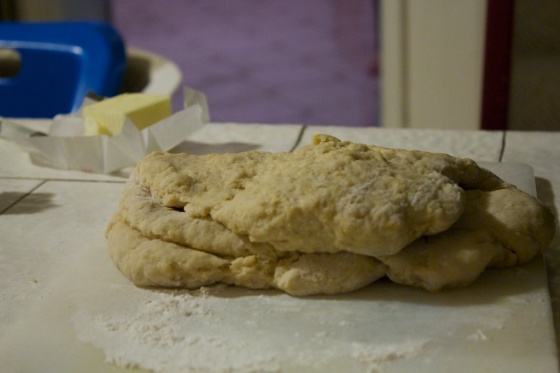 It’s a bit harder to get this dough to become entirely smooth, even with a stand mixer. So how do you tell when it’s kneaded? The window-pane test.

Let the dough rest in an oiled bowl in a warm location. I like to do this in an oven that was heated for a few minutes then turned off. This way, its a nice and warm for my cinnamon roll dough.

After the dough has doubled, turn it out and let it rest for 10 minutes so the glutens get a chance to relax. Then, punch it down using your knuckles repeatedly so you even distribute the yeast bubbles and flatten the dough at the same time. 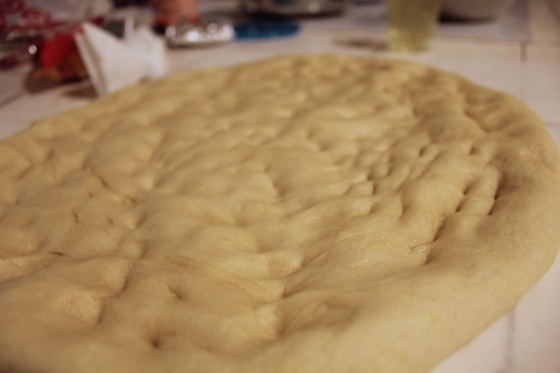 Then, using a rolling pin, knead your dough out and spread it with some melted butter… looks good enough to eat already… 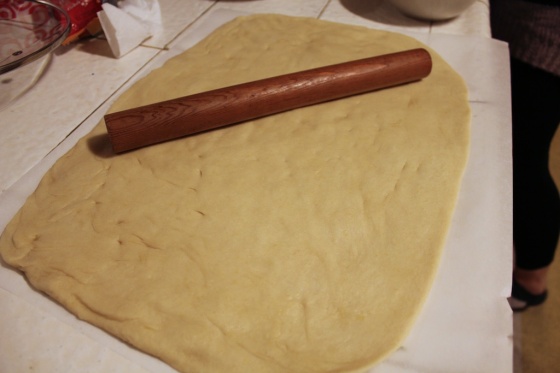 While I was doing this, my trusted helper, Shun, was mixing together cinnamon and brown sugar. 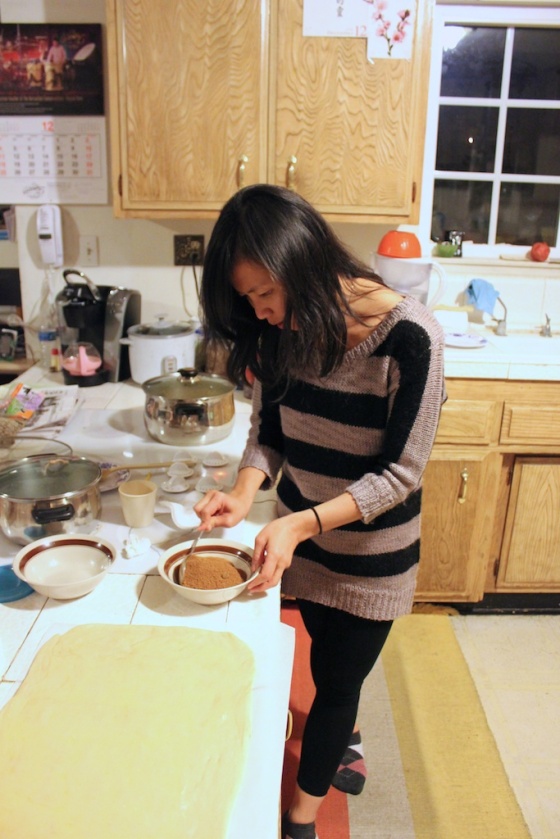 Dust the buttered dough with the sugar and spread it out thinly leaving a 1/4 inch boarder on top. Then, roll the entire dough up. 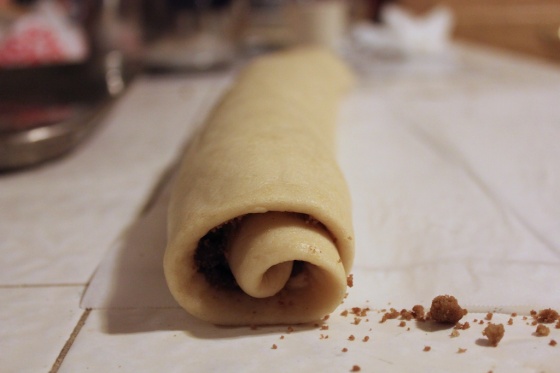 Cut the dough into 12 even pieces. I let Shun handle this as well, I have a tendency to mess up everything I cut when it comes to baking.

After cutting these, let them rise until doubled again. I like to use a toasty oven and cover it with some saran wrap.

After the dough has doubled, I bake it in a preheated oven and start on the cream cheese frosting. I start by whipping the cream cheese and butter together. It felt really weird to not have my stand mixer do this.

After beating the cream cheese and butter until fluffy, I worked in powdered sugar and some nutmeg. The nutmeg was my personal special touch for the holidays. 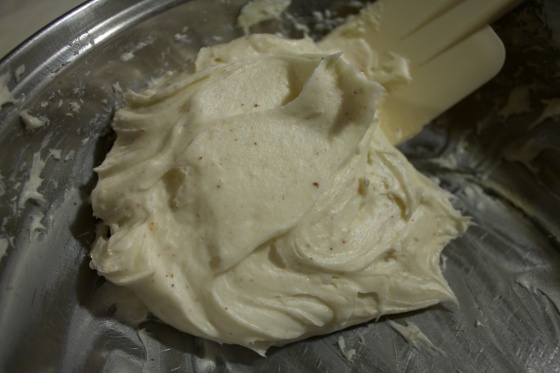 Success! The warm cinnamon rolls came out. I spread dollops of frosting on each cinnamon roll but I left two untouched for the baby.

To make life easier, I just quickly dabbed the frosting on top then stuck it back in the warm oven for a minute until the frosting started melting. Then, I smothered the frosting and served it fresh and warm. 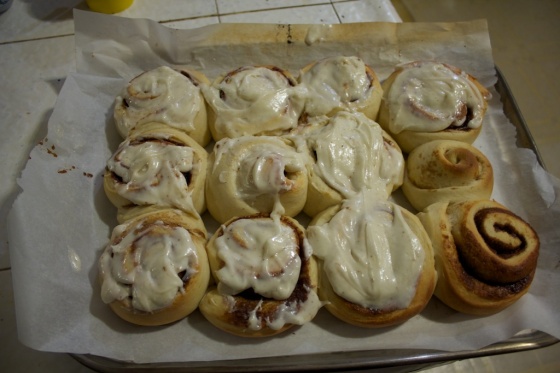